Not to be confused with the actual place.

This is a brilliant LEGO® NINJAGO® ninja market featuring 9 LEGO minifigures including NINJAGO Digi Jay and Avatar Nya, and a host of other mini-ninjas and villains. With these ninja collectibles and plenty of cool accessories, NINJAGO fans can freely express themselves and recreate scenes from the Gamer's Market in Prime Empire. An exciting new way to build your toy playset with ninja collectibles Instructions PLUS offers an interactive guide to constructing this toy playset featuring minininjas. Available on the free LEGO Life app, it has zoom and rotate viewing tools to help children piece together their LEGO bricks. The perfect buildable toys LEGO NINJAGO building sets make the perfect gift for kids by letting them enter a mystical world of adventure to team up with their ninja heroes against the forces of evil. NINJAGO® fans will be endlessly entertained as they role-play with action toys including gaming figures, buildable toys, cars, dragons and more.

"For the Gamer's market, the intention was to create a people pack for Ninjago. Utilizing the team of gaming and in-universe gave some opportunities for putting in character designs that we have never done before with the mindset of this is an "avatar".

Ever since I joined the Ninjago team as a designer back in 2014 I have been keeping track of characters I thought would make great products. Sometimes we have had the opportunity to integrate some of them here and there. One of my favorite character designs and one that has been on my wishlist to integrate have been Zanes Pink Ninja suit. Even though this is only represented in one episode it is still one of the more iconic designs that have been missing. So when I was putting together the brief for the gamers marked he was the first character to go on there.

Another easteregg put in this set is to be found at the hat shop. Here I wanted to reference different themes within LEGO. And because of this opportunity Markus Rollbüler talked me in to making a color change to the classic space helmet. Since all the blue classic space helmets comes from Benny all of them comes with a crack, So with this change you would be able to get a classic blue spaceman with regular "untracked" helmet."[2] 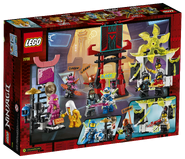