Ninjago Wiki
Register
Don't have an account?
Sign In
Advertisement
in: 2020, Ninjago: Masters of Spinjitzu, Sets,
and 5 more
English

71718 Wu's Battle Dragon
71717 Journey to the Skull Dungeons is a Ninjago - Master of the Mountain set that was released in most countries on June 1, 2020, in most US stores on August 15, 2020, and in Canada and LEGO stores in the US on August 24, 2020. It includes Lloyd, Jay, and Nya in their Hero outfits, Murt, the Shadow Blade of Deliverance, and a segment of the Skull Keep featuring a cage. A spinner dice element and a health counter for the board game is also included in this set.

Kids can recreate thrilling scenes from the NINJAGO® TV series with this Journey to the Skull Dungeons (71717) playset. With 4 minifigures, including Hero Nya, Hero Jay, Hero Lloyd and Murt, creative youngsters can plot their own dungeon adventures.

Amazing LEGO® NINJAGO board game
This super-cool building set for kids also doubles as a LEGO NINJAGO board game. Youngsters can use the dice spinner to plot their way through the dungeon as they attempt to avoid the ninja traps, spiders and prison guard Murt before they can grasp the Shadow Blade of Deliverance and free one of the ninjas from prison. It can also be combined with other LEGO sets to create a giant board game

The perfect building sets for kids
LEGO NINJAGO ninja toys give youngsters a gateway into a fantasy world where they can indulge in creative play and role-play stories with ninja minifigures. Your little ninja will be captivated as they play with a range of fun toys, including vehicles, mechs and dragons.

"This is the largest LEGO set for which I was tasked to design the build. I thoroughly enjoyed designing this set as it brought back happy memories of building my LEGO Castle and Knights Kingdom sets as a child. The model features an obstacle-ridden, stepping stone path strewn with lava, leading to the villain's hideout. Play functions include an exploding stepping stone and a lowering cage."[2] 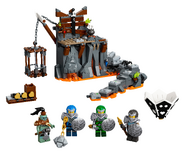