Ninjago Wiki
Register
Don't have an account?
Sign In
Advertisement
in: 2020, Ninjago: Masters of Spinjitzu, Sets,
and 5 more

This LEGO® NINJAGO® Wu’s Battle Dragon (71718) building set for kids with 2 minifigures will be adored by fans of ninja toys, who can use it to stage their own fantasy stories from the NINJAGO TV series. The awesome posable dragon can move its wings, tail, feet and head.

The best dragon building kit
With 2 buildable figures of Hero Wu and Gleck, ninja fans can immerse themselves in the mysterious Dungeons of Shintaro and play out battles between themselves for the Ivory Blade of Deliverance. Wu can ride his flying dragon, which will enchant youngsters’ creative minds.

The ultimate ninja playsets
LEGO NINJAGO building toys for kids let them learn about the honorable values of ninjas as they venture into a world of mystery where they can role-play their heroes battling powerful dark forces. NINJAGO fans will be gripped for hours by these fun toys, which include dragons, cars and mechs in the different playsets.

"This one holds a special place i my heart as the initial look and idea was something i did for myself on my free time coming from my love for all things dragon. My manager loved it and wanted to add it to the linup and happily we made it happen! I challenge myself when doing creatures to be as accurate to real life anatomy as possible in order to create the most plausible look and i feel that this one is a great success in this regard."[2] 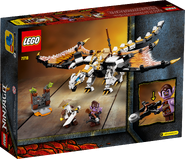