Ninjago Wiki
Register
Don't have an account?
Sign In
Advertisement
in: Ninjago: Masters of Spinjitzu, 2020, Sets,
and 7 more
English

71722 Skull Sorcerer's Dungeons
71721 Skull Sorcerer's Dragon is a LEGO Ninjago - Master of the Mountain set that was released in most countries on June 1, 2020, in most US stores on August 15, 2020, and in Canada and LEGO stores in the US on August 24, 2020. It includes Nya, Jay, and Kai in their Hero suits, the Skull Sorcerer, the Skull of Hazza D'ur, two Re-Awakened, the Ivory Blade of Deliverance, Grief-Bringer and a small section of the Dungeons of Shintaro. A dice spinner and two health counters for the board game are also included.

NINJAGO® fans can build and play with the Skull Sorcerer’s Dragon (71721).
This dragon building kit features 6 buildable figures for captivating creative play. Kids will be able to enjoy role-play action as the ninjas battle the Skull Sorcerer, his dragon and his skeleton warriors, to free themselves from the spooky Dungeons of Shintaro.

Amazing playset for board game adventures
This dragon building set also doubles as a LEGO® NINJAGO board game boasting a ninja dice spinner and an assault course with a trap for the ninjas to navigate. Kids spin the dice and plot their way through the game to grasp the prized Ivory Blade of Deliverance. It can also be combined with other LEGO sets to create a giant board game.

Stunning Building Sets for Kids
LEGO NINJAGO sets let imaginative youngsters escape to a mystical world where they can act out stories as their ninja heroes, taking on the forces of evil. Kids can indulge in hours of fun role play with a range of dragons, cars, jets and more.

"This is the biggest dragon I have build to date. It is also the 7th dragon from my side. Making a Skeleton dragon that is buildable and playable at the same time was not an easy task. I knew from the beginning that I wanted the ribcage prominent and with a function to it. The dragon started as a wyvern but because of the size, it would have caused too many sacrifices to keep that silhouette.

Even though this is a Ninjago dragon, I really wanted it to work as a more classic skeleton dragon as well. in this way, it should be able to work in a more classic fantasy castle context.

I Love board games and trying to come up with small play trickers that could support the boardgame play we have in this lineup was very fun and interesting. And figuring out how it can be both a boardgame and a normal playset was a great challenge."[2] 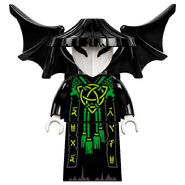