You may be looking for the Titan Mech itself, or the original set.

Get young ninja fans role-playing exciting scenes from season 5 of the LEGO® NINJAGO® TV series, with this Zane’s Titan Mech Battle (71738) Legacy set. Featuring posable legs and arms, a sword and spinning chainsaw in its hands, plus 2 spring-loaded shooters and a cockpit for ninja minifigures, kids will love this modern update of the original mech.

Hours of fun for passionate NINJAGO fans
This ninja toy features 4 minifigures: ninjas Zane and Jay Legacy plus 2 Ghost Warriors Ghoultar and Soul Archer, all armed with cool weapons including a bow and arrow and scythe to inspire endless NINJAGO battling fun. New for January 2021, Jay Legacy is a special golden collectible minifigure to celebrate 10 years of NINJAGO toys.

Top gifts for imaginative kids
NINJAGO building toys open up a world of exciting adventures for kids. Little ninjas can team up with their heroes to battle a cast of evil villains as they role-play with an amazing collection of cool toys including dragons, mechs and temples.

"I was very excited when I was briefed to make a new big version of Zane’s mech. I am really happy with how this thing turned out. As a big fan of the original set, this was so much fun.

From the beginning, I was briefed to make this a $60 version of Zane's mech and that was a really cool thought experiment. Because the show stuck very close to the design of the set, I was told to use this more as an exploration of the concept.

I did some sketches closer to the original design, followed by some sketches that were very far out there. With both extremes mapped out, I was then tasked to find a nice middle ground. This set the final direction and then I went into refining mode, focusing on the build and small details. 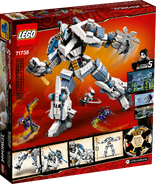 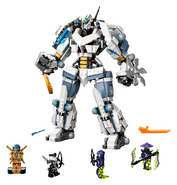 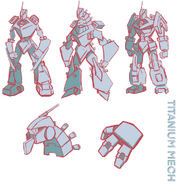