71741 Ninjago City Gardens
71742 Overlord Dragon is a Ninjago: Legacy Wave 4 set that was released on January 1, 2021. It includes Golden Legacy Lloyd and The Overlord in both minifigure and dragon form.

Endless thrills for young builders
The posable dragon toy is accompanied by 2 minifigures: ninja Golden Lloyd armed with a katana on his back and the Overlord wielding his own sharp blade, so kids have all they need to play out exhilarating battles in the sky and on the ground in this classic fight between good and evil.

Unique toys for creative kids
LEGO NINJAGO toys offer a world of all-consuming fun as kids travel to an exciting fantasy world where they can join forces with their heroes to battle a cast of evil villains playing with an amazing collection of cool toys including dragons, jets and vehicles. 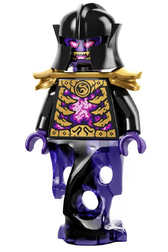 Exclusive Legacy Overlord minifigure
Add a photo to this gallery

Retrieved from "https://ninjago.fandom.com/wiki/71742_Overlord_Dragon?oldid=646057"
Community content is available under CC-BY-SA unless otherwise noted.