Not to be confused with the actual bikes.

Kids will be thrilled to recreate action scenes from the LEGO® NINJAGO® TV series with this fantastic Lloyd’s Jungle Chopper Bike (71745). The 2-in-1 vehicle features 2 stud-shooters, an opening cockpit, working suspension and a flyer that can be detached and used as a surfboard. Unique toys for fantasy adventures The ninja playset has 3 minifigures: Island Lloyd, Island Nya and a Rumble Keeper to help kids play out their own make-believe jungle and sea adventures. These characters can stage battles among themselves to see who wins the precious storm amulet that also comes with this set. Top toys for ninja fans NINJAGO playsets encourage kids to step away from their screens and develop crucial life skills by enjoying hands-on playtime, on their own or with friends. A world of exciting adventures opens up to them through an amazing collection of ninja toys, including dragons, mechs and vehicles.

"This was the first set I designed from scratch! Given the prompt "Lloyd jungle bike" on my third day of working at LEGO, I was given complete freedom to try a fresh take on a Ninjago staple. This was an excellent way to learn the LEGO design process and realize just how much effort goes into each and every set LEGO designs. As my manager put it "If you aren't sick of your set by the end of the design process, you haven't built it enough." I've built this bike at least 30 times (I counted).

The Halo warthog was definitely a source of inspiration in both color and design language, since it felt like it captured the rugged, all-terrain look we were striving for. The suspension was a challenge to integrate with the detachable surfboard/flier, but ended up being solved by borrowing Freddy Charters' brilliant solution in 71700.

As with every LEGO set, credit goes to the graphic designer and BI designer for their incredible work in helping the set be all it could be.

On a sentimental note, this set represents the fulfillment of a childhood dream that I never would have thought possible. It's always going to have a special place in my heart :)"[3] 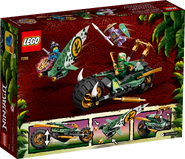 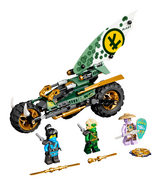