Not to be confused with the actual dragon or the species.

71747 The Keepers' Village
71746 Jungle Dragon is a Ninjago - The Island set that was released on March 1, 2021. It comes with Island Lloyd, Island Zane, a Thunder Keeper, PoulErik, the jungle surfboard, and Zippy.

Get kids role-playing exciting scenes from the LEGO® NINJAGO® TV series with this super-cool Jungle Dragon (71746) ninja playset. Featuring highly posable wings, legs and tail, a jaw that opens and closes, plus a saddle for a ninja to ride in, it inspires the best imaginative play.

Cool ninja toys for kids
The dragon toy comes with 4 minifigures: Island Lloyd, Island Zane, PoulErik and Thunder Keeper, all armed with weapons so kids can play out gripping clashes to grab the storm amulet. There is also a surfboard with a shooting function to add even more fun to battles.

Gifts to wow friends
LEGO NINJAGO toys make great gifts for kids who want to escape to an exciting and immersive fantasy world where they can team up with their heroes to battle a succession of evil villains. Ninja fans can play with an amazing collection of fun toys including dragons, jets and vehicles.

"This is the first set I did for Ninjago. One of the great things about this set for me is that I had the opportunity to do the sketch model as well as the finished model.

I enjoyed trying to find a way to bring something new to the pantheon of popular Ninjago dragons. My main goal was to try and infuse it with as much liveliness as possible. It was important for it to appear constantly in motion. I also wanted to give it the personality of a big, hyper dog, slobbery tongue, overactive tail and all.

The decorations for this set were designed by Kjeld Sørensen, and instructions by Morten Odgaard."[2] 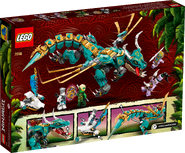