71753 Fire Dragon Attack
71752 Ninja Sub Speeder is a Ninjago - Seabound set that was released in most countries on June 1, 2021 and on August 1, 2021 in the United States and Canada.[3] It includes Scuba Jay, Scuba Cole, two Maaray Guards, the Wave Amulet, and the sub car.

Kids can bring to life the action-packed LEGO® NINJAGO®: Seabound TV series by playing out scenes with this Ninja Sub Speeder (71752). The 2-in-1 vehicle can be transformed into either a car or submarine toy and features a detachable drone, 2 stud shooters and an opening cockpit.

Unique toys to encourage creative building The ninja playset has 4 minifigures: Scuba Jay and Scuba Cole, both dressed in underwater gear and flippers, and 2 Maaray Guards with cool weapons. Kids can stage make-believe battles on land or under the sea to see who wins the wave amulet toy that comes with the set.

Awesome toys for ninja fans NINJAGO buildable kits transport kids to a fun-filled fantasy world where they can team up with their ninja heroes to learn about their positive values and battle villains. They can enjoy this enriching world with an amazing collection of toys, including dragons, cars and mechs. 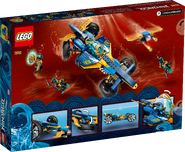