71756 Hydro Bounty
71755 Temple of the Endless Sea is a Ninjago - Seabound set that was released in most countries on June 1, 2021 and on August 1, 2021 in the United States and Canada.[1] It includes NRG Nya, Scuba Kai, Benthomaar, two Maaray Guards, Glutinous, Kalmaar, Wojira, the Storm and Wave Amulets of Wojira, Kai's mini submarine and the Temple of Wojira.

Ninja fans can re-enact underwater adventures from the LEGO® NINJAGO®: Seabound TV series with the Temple of the Endless Sea (71755). This detailed premium ninja playset includes a laboratory, a prison, a submarine, a manta ray and the sea serpent Wojira in chains.

A playset guaranteed to wow kids
The set also features 7 minifigures: Scuba Kai, NRG Nya, Glutinous, Prince Kalmaar, Prince Benthomaar and 2 Maaray Guards for kids to act out amazing clashes as they fight to gain control of the all-important wave and storm amulets that are also included in the set.

Great gifts to inspire enriching group play
LEGO NINJAGO buildable sets immediately transport kids to an all-consuming world of fantasy action. Here they can join forces with their favorite ninja heroes to battle the forces of evil by playing with a brilliant collection of ninja toys, including jets, cars and mechs.

"71755 is the 5th and last set I've worked on for Ninjago. Large playsets are not in my comfort zone as a builder, so being tasked with designing a $100 playset was intimidating! However, this ended up being a fantastic learning opportunity and I am pretty proud of the results.

This set is a collaboration with Esben Fløe, who designed the excellent Wojira as I was still new to the company and handling the whole thing was probably a bit too much! Starting from an excellent sketch model whipped up in a morning by Markus Rollbühler, my challenge was to capture a Ninjago take on Atlantis. As gold is one of the key colors of Ninjago, I decided to have a treasure room at the bottom of the main building with a circular door to frame the dragon coin. At one point we actually had the Monkey King staff in the treasure room, since part of Journey to the West includes Sun Wukong obtaining the staff from the Ao Guang, the Dragon King of the East Sea in his underwater temple. The layout of the temple was planned as a sort of arena for Nya to do battle with Wojira so having the different buildings connect with clips and bars made some sense so the whole set could sit flat on a shelf or be curved into a semi-circle. As a kid, I loved adding my own builds to existing sets and I hope the simple bar/clip system will invite builders to create their own underwater buildings to attach to and expand the temple!

Two fun details I enjoyed including: the mysterious yellow eggs sitting on Kalmaar's desk (where do they come from? Build the model and see!) and the singing bass plaque mounted above the Prince's balcony :)

Credit to Mike Patton for the super cool stickers and Lis Christensen for her tireless work on the Building Instructions."[2] 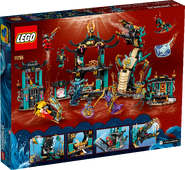