71776 Jay and Nya's Race Car EVO
71767 Ninja Dojo Temple is a Ninjago: Core set that was released on January 1, 2022.[1] This set includes Lloyd, Cole, Kai, Nya and Wu in their Dojo suits, P.I.X.A.L., a Cobra Mechanic, a Boa Destructor, the Wisdom banner, a vehicle for the Snake warriors, a mech for Kai and a Dojo Temple.

Get ninja fans aged 8+ training their heroes and playing out battles with this amazing 3-tiered LEGO® NINJAGO® Ninja Dojo Temple (71767) playset packed with cool features. The dojo has a training area and 5 rooms, including Wu’s tearoom, Pixal’s workshop and an armory.

The best adventures for ninja fans
NINJAGO toys lure kids away from their screens and into an enthralling world of fantasy action. Here they can team up with their brave ninja heroes to battle the forces of evil with an extensive collection of building sets including mechs, dragons and temples.

"I had a lot of fun designing this one as it was the first opportunity for me to do some more realistic architecture (Empire temple i'm looking at you). The ask was to create a new "hub" for the ninja from where they could venture out to the different adventures depicted on the other sets of the line. I tried to get a traditional look, still Ninjago style but a bit different from what we have done in the past few years, mainly the Temple of Spinjitzu. A lot was inspired by ideas, concepts and colour explorations done by my friend and colleague Markus Rollbühler."[3] 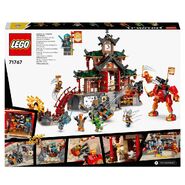 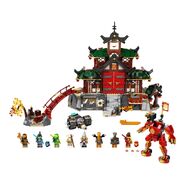 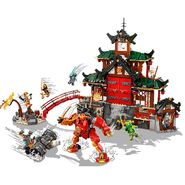 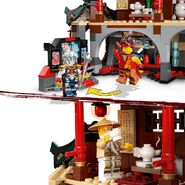 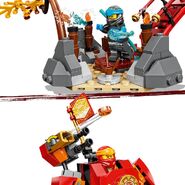