71772 The Crystal King
71771 The Crystal King Temple is a Ninjago - Crystalized set that was released in most countries on June 1, 2022 and will be released on August 1, 2022 in the United States and Canada. It includes Zane, Kai, Jay, Cole, Crystal King, a Vengestone Guard, the crystalized versions of all four Golden Weapons, and the Crystal Temple.

The Crystal King Temple (71771) playset lets kids aged 8 and up relive their favorite scenes from the NINJAGO®: Crystallized TV series. The temple is packed with cool features and functions, including The Crystal King’s throne, a floating prison and several traps.

A playset to enchant passionate ninja fans
The Crystal Temple includes 6 minifigures for ninja fans to play out action-packed adventures. There are 4 exclusive ninja minifigures: Cole, Zane, Kai and Jay, plus an exclusive Crystal King minifigure with 4 arms, and a Vengestone Guard with crystal armor. 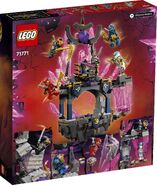 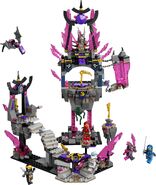 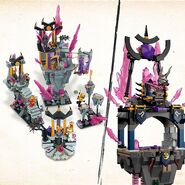 An early version of the set.