71775 Nya's Samurai X MECH
71774 Lloyd's Golden Ultra Dragon is a Ninjago - Crystalized set that was released in most countries on June 1, 2022 and will be released on August 1, 2022 in the United States and Canada. It includes Golden Jay, Golden Kai, Golden Zane, Golden Cole, Golden Oni Lloyd, two Vengestone Brutes, a Vengestone Warrior, the Crystal King, all four of the Golden Weapons, and the Golden Ultra Dragon.

Kids aged 9 and up can stage their favorite scenes from the NINJAGO®: Crystallized TV series with Lloyd’s Golden Ultra Dragon (71774). The dragon playset includes NINJAGO’s biggest ever dragon, featuring 4 heads, highly posable legs and tail, and a pair of wings that unfolds into 3 blades – all in gold!

A building set to capture the imagination of ninja fans
This building set is packed with 9 minifigures: an exclusive Golden Oni Lloyd; Golden Cole, Golden Zane, Golden Kai and Golden Jay, who are all armed with their elemental golden weapons; Crystal King; 2 Vengestone Brutes; and a Vengestone Warrior. 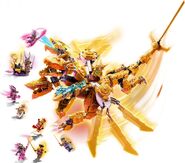 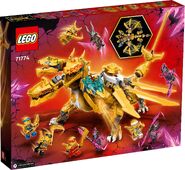