TBA
71775 Nya's Samurai X MECH is a Ninjago - Crystalized set that was released in most countries on June 1, 2022 and will be released on August 1, 2022 in the United States and Canada. It includes Wu, Samurai X Nya, Golden Jay, Oni Garmadon, Nelson, The Mechanic, a Vengestone Warrior, General Pythor, and the Samurai X MECH. 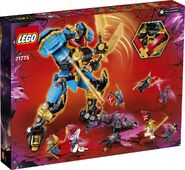