Ninja heroes vs. snake warriors
The impressive ninja playset includes 4 minifigures: Jay armed with a sword, Nya with a spear, Cobra Mechanic with a sword, and Boa Destructor. New for January 2022, when kids defeat the ninja enemies and complete their mission, they are rewarded with a collectible banner.

A digital experience for passionate LEGO® builders
The playset comes with interactive digital building instructions to make the building experience even more fun. Available in the free LEGO Building Instructions app for use on smartphones and tablets, the zoom and rotate tools help you visualize the model as you build. Builders can also save their progress at any point on the app. 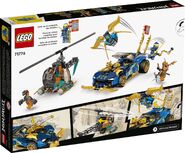