891502 Krait
891501 Kai is a foil pack released in 2015. It contains Kai, with a Golden Sword Holder with a silver katana in it and a black katana. It was included in issue 1 of the Ninjago Magazine. 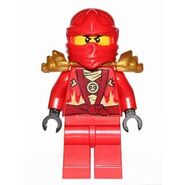