891504 Weapons Rack
891503 Cole is a foil pack released in 2015. It contains Cole, along with a Golden Binocular Holder with two Fangs on it and a Golden Nin-Jô with a Chain Whip on top of it. It was included in issue 3 of the Ninjago Magazine. 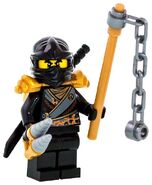