9442 Jay's Storm Fighter
9441 Kai's Blade Cycle is a Ninjago: Masters of Spinjitzu - Rise of the Snakes set that was released in January 2012. It includes Kai ZX, Rattla, the Hypnobrai Staff, two Katanas, a Spear, two golden blades, and the Blade Cycle.

Battle for the golden Hypnobrai staff with Kai’s Blade Cycle!

Race after Rattla on Kai’s Blade Cycle! Don’t let him get away with the Golden Hypnobrai staff and the anti-venom hidden inside! Can Kai defeat his mind-controlling menace with the Blade Cycle’s big blade attack? You decide! Watch out for Rattla’s hypnotic stare and tail as you battle for the prize! Includes Kai ZX and Rattla minifigures, Golden Hyponobrai staff and 2 ninja swords. 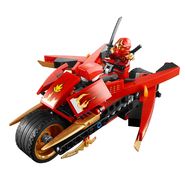