You may be looking for the vehicle, Legacy set or the 4+ Legacy set.

9442 Jay's Storm Fighter is a Ninjago: Masters of Spinjitzu - Rise of the Snakes set that was released in 2012. It includes Jay ZX, Snappa, the Fangpyre Staff, a Scythe Blade, a Hypno Viper, two Dragon's Fires, and golden blades, and the Storm Glider.

Unleash a ninja assault in the sky with Jay’s Storm Fighter!

Jay streaks through the sky in his super-speed storm fighter on a mission to recover the golden Fangpyre staff and its powerful anti-venom. As he nears the cliff-top shrine, Fangpyre Scout Snappa is already waiting for him. Deploy the Storm Fighter’s awesome wing attack! Set includes Jay ZX and Snappa minifigures, snake staff shrine, golden Fangpyre staff, 3 weapons and 2 torches. 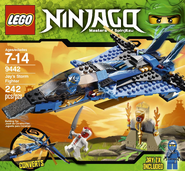 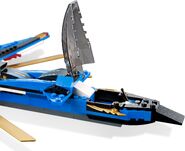