You may be looking for the Ultra Sonic Raider itself or the Legacy remake.

9450 Epic Dragon Battle
9449 Ultra Sonic Raider is a LEGO Ninjago: Masters of Spinjitzu - Rise of the Snakes set that was released in May 2012. It includes Kai ZX, Jay ZX, Cole ZX, Zane ZX, Spitta, Pythor, the Shurikens of Ice, the Sword of Fire, the Nunchucks of Lightning, the Scythe of Quakes, the Fangpyre Fangblade, a silver katana, a black katana, a Silver Battle Mace, and the Ultra Sonic Raider, which includes fourteen golden sais.

Track down Pythor and the fang blade with the terrain-defying Ultra Sonic Raider!

In the amazing Ultra Sonic Raider, the Spinjitzu masters spot supreme leader Pythor and his protector Spitta, a soldier of the Venomari tribe, taking off with the Fangpyre fang blade. Chase them across everything with the all-terrain tracks or detach the flying vehicle, extend the golden blade wings and take the battle to the skies! If all else fails, crank up the huge speaker cannons and tame the snakes with some ancient snake music. Don't let them get away! Includes 6 minifigures: Cole ZX, Jay ZX, Kai ZX, Zane ZX, Pythor and Spitta. Set includes Ultra Sonic Raider, Fangpyre fang blade with red anti-venom capsule, 4 golden weapons, and 5 regular weapons. 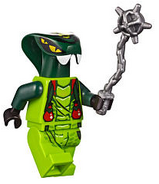