9457 Fangpyre Wrecking Ball
9456 Spinner Battle Arena is a LEGO Ninjago: Masters of Spinjitzu - Rise of the Snakes set that was released in 2012. It includes Kendo Kai, Rattla, both of their Spinners, the Sword of Fire, the Hypnobrai Staff, a Black Fang Spear, a pitchfork, a Spear, a Golden Katana, a Golden Scimitar, a Golden Sai, a Thunderbolt Dagger, a Toxic Viper, two Character Cards, and eight Battle Cards.

Spin for weapons and glory in the Spinner Battle Arena!

Bring on the battles like never before in the all-new Spinner Battle Arena! Place your characters on the spinner and arm them with 9 different weapons! Then use the battle cards to spin your way to victory. Beware of the arena’s snake and dragon attacks! Includes Kendo Kai and Rattla minifigures, spinner arena, snake attack, dragon attack, weapons rack, 2 spinners, 2 spinner crowns, golden Hypnobrai staff, 8 weapons, 2 character cards and 8 battle cards. 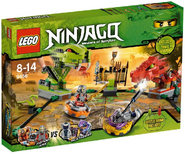 Kendo Kai on his Spinner 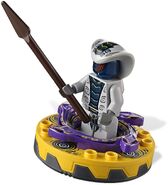 Weapons in this set

Rattla minifigure
Add a photo to this gallery

Retrieved from "https://ninjago.fandom.com/wiki/9456_Spinner_Battle_Arena?oldid=614132"
Community content is available under CC-BY-SA unless otherwise noted.