9556 Bytar is a LEGO Ninjago: Masters of Spinjitzu - Rise of the Snakes Booster Pack that was released in 2012. It includes Bytar, three weapons (a Scythe Blade, a Double-Bladed Axe, and a Golden Viper), a lift brick, two shields, three chains, a Character Card, and four Battle Cards.

Customize your Spinjitzu battles with Bytar!

Prepare to battle the Spinjitzu masters! The tough Bytar is strong enough to crush solid stone with his constricting body! Time to put the squeeze on those nasty ninjas! Customize your spinners like never before with the Bytar minifigure, shields, fang blades, LEGO lift brick, golden weapon and 2 regular weapons. Use the 4 battle cards included in the set to influence the outcome! 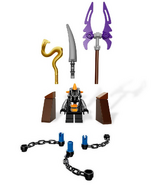 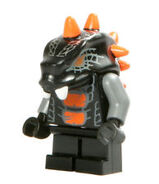 Add a photo to this gallery
Retrieved from "https://ninjago.fandom.com/wiki/9556_Bytar?oldid=561877"
Community content is available under CC-BY-SA unless otherwise noted.