9558 Training Set is a Ninjago Spinners - Rise of the Snakes set and was released in 2012. It includes Kendo Kai, a Spinner, a crown, eight weapons (a Silver Sword, a Golden Dark Blade, a Katana, a Spear, the Staff of Dragons, a Dark Axe, a Scythe Blade, and a Nin-Jô), a Character Card, and four Battle Cards. 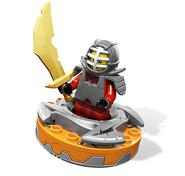 Kendo Kai on his spinner

Kendo Kai and his weapons