9563 Kendo Zane
9562 Lasha is a Ninjago Spinners - Rise of the Snakes set that was released in 2012. It includes Lasha, a Golden Axe, a Chained Fang of Poison, a Toxic Viper, a Character Card, four Battle Cards, and three bricks.

Power up your Spinjitzu battles with this venomous villain!

Spin your way to victory against the Spinjitzu masters! Lasha is a part of the Venomari snake tribe and is always on the lookout for those good-for-nothing ninjas! Customize your spinner with the green snake crown. Then use the 4 battle cards included to influence the outcome. Set also includes Lasha minifigure, purple spinner, green snake crown, golden weapon, 2 regular weapons and character card. 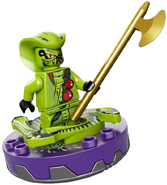 Lasha on his spinner

Lasha and his weapons