9564 Snappa is a Ninjago: Spinjitzu Spinners - Rise of the Snakes set that was released in January 2012. It includes Snappa, his Spinner with Spinner Crown, a Golden Spear, a Fangpyre Spear, a Silver Dark Blade, a Character Card, four Battle Cards.

Power up your Spinjitzu battles with Snappa!

Spin your way to victory against the Spinjitzu masters! Snappa is part of the Fangpyre snake tribe and really sinks his fangs into battle! Will he finally make those ninjas feel his bite? You decide! Customize your spinner with the red snake crown! Then, use the 4 battle cards included in the set to influence the outcome. Set also includes Snappa minifigure, green spinner, red crown, golden weapon, 2 regular weapons and character card. 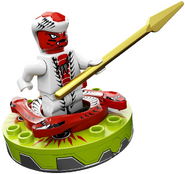 Snappa on his spinner 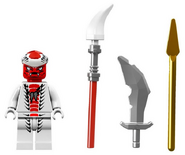 Snappa and his weapons

Snappa Minifigure
Add a photo to this gallery
Retrieved from "https://ninjago.fandom.com/wiki/9564_Snappa?oldid=561885"
Community content is available under CC-BY-SA unless otherwise noted.