9571 Fangdam
9570 NRG Jay is a Ninjago Spinners - Rise of the Snakes set that was released in May 2012. It includes NRG Jay, his Spinner, a silver crown, a black katana, a Golden Icicle, a Silver Spear, three bricks, a Character Card, and four Battle Cards.

Power up your Spinjitzu battles with NRG Jay! 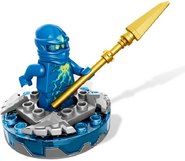 NRG Jay on his spinner with the Golden Icicle