9573 Slithraa is a Ninjago Spinners - Rise of the Snakes set that was released in 2012. It includes Slithraa, his Spinner, a blue Serpentine-style crown, the Hypnobrai Staff, a Translucent Blue Viper, a Chained Sai, a Character Card, four Battle Cards, and three bricks.

Power up your Spinjitzu battles with the Slithraa!

Spin your way to victory against the Spinjitzu masters! With his hypnotizing stare and mesmerizing golden weapon, Slithraa is about to catch the eye of his opponents, the ninja warriors! Use the 4 battle cards included to influence the outcome. Set includes minifigure, blue transparent spinner, blue crown, LEGO bricks, golden weapon and 2 regular weapons, character card and 4 battle cards. 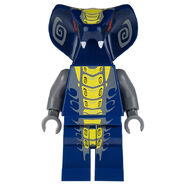