9579 Starter Set
9574 Lloyd ZX is a Ninjago Spinners - Rise of the Snakes set that was released in August 2012. It includes Lloyd ZX, his Spinner, a Spinner Crown, three weapons (the Super Bolt, a Nin-Jô, and a Silver Sword), three bricks, a Character Card, and four Battle Cards.

Power up your Spinjitzu battles with Lloyd ZX!

Spin your way to victory against the forces of evil! Lloyd ZX is the legendary green ninja, destined to win the great battle between good and evil and bring peace once again to the land of Ninjago. But before he can fulfil his destiny, his fellow ninjas must help him master the art of Spinjitzu and defeat the evil Serpentine snake tribes! Use the 4 battle cards included to influence the outcome. Set includes minifigure, gold spinner, green crown, LEGO bricks, golden weapon, 2 regular weapons, character card and 4 battle cards.

Lloyd ZX on his spinner with the Super Bolt 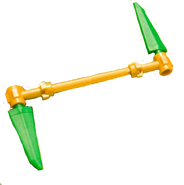