Power up your battles with this Weapon Pack! 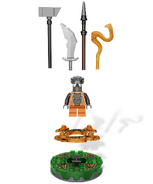 Chokun's spinner, crown, character, and weapons included in the set.

NRG Kai and Chokun on their spinners.
Add a photo to this gallery
Retrieved from "https://ninjago.fandom.com/wiki/9591_Weapon_Pack?oldid=396682"
Community content is available under CC-BY-SA unless otherwise noted.