“I intended to build one for each of us, but ran out of time. I didn't even have time to fully test these suits, but I am reasonably sure that they will function as intended.”
— P.I.X.A.L., "Five Thousand Fathoms Down"

The Call of Home (flashback)

Intact (one)
Inoperative (one)

Kelly Metzger
The APS suits are mechs used by Nya, Maya, and Lloyd.

P.I.X.A.L. intended to build an APS suit for each ninja, but because she ran out of time, she was only able to create two. She kept them in the Hydro Bounty for future use.

After the Hydro Bounty got damaged, P.I.X.A.L. showed the ninja and Maya the APS suits and mentioned they were supposed to be one for each person, but there was not enough time to build. Maya and Nya begin piloting them and began traveling through the ocean. They found a temple and entered, finding Kalmaar attempting to awaken Wojira. However, they were caught and tried to escape using the APS suits, but they were powered down by Kalmaar.

Glutinous was observing the APS suits until he was interrupted by Nya and Maya, who regained possession of the mechs to escape from the Temple of Wojira.

Nya and Maya used the APS suits to escape from the Ripper Sharks and Maya encouraged Nya to use her powers against them with her mech. However, during the battle with the Ripper Sharks, Nya's APS suit short-circuited and wasn't able to function.

While fighting the Merlopians, Lloyd climbed into one of the available APS suits to fight the Maaray Guards. While throwing around the guards, Lloyd was shot by Kalmaar, but was able to escape along with the Hydro Bounty.

While Lloyd was fixing on one of the APS suits, he puts out a fire by using a fire extinguisher.

Stride into battle on the bottom of the Endless Sea in Lloyd’s Hydro Mech. Watch out for the dangerous eel-like Maaray Guard – he is primed to wage war against you to win the precious wave amulet! Jump into the mech’s cockpit, brandish its large sword and grab the Guard in its massive hydraulic claw! It is essential that you triumph in this underwater clash to protect NINJAGO® City![1]

The Endless Sea is looking choppy today. Far below the surface, Lloyd is striding into battle in his Hydro Mech. He’s determined to grab the precious wave amulet from the eel-like Maaray Guard. Look out for the mech’s hydraulic claw—it’s bigger than any crab’s, and it’s poised to close in on the prize when Lloyd hits the controls. SNAP!

The suits are able to traverse underwater, and are able to make large jumps using water jets that are released from the back. 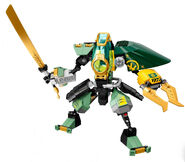