View source
watch 01:25
Jurassic World: Dominion Dominates Fandom Wikis - The Loop
Do you like this video?
Play Sound
“This is Acidicus. He runs our library. He loves books.”
— Skales about Acidicus, "Ancient History"

Can of Worms
9450 Epic Dragon Battle

At one point in his life, Acidicus invented special vials that can safely and effectively store Venomari Venom, ensuring that his forces never have to worry about running out of venom in battle.[2]

While the Venomari were locked in their tomb, Acidicus challenged the former general of his tribe to a duel, winning and becoming the new general of the Venomari tribe.[3][4]

Kai and Jay were sent out on a mission to investigate the Venomari Tomb, but upon reaching the Toxic Bogs, they found the tomb to be empty. As they looked around Kai was met by Spitta, who spat venom in his eyes. While Kai began to hallucinate, Acidicus and the rest of his tribe came out of hiding. Zane and Cole arrived but were quickly cornered by the Venomari and Constrictai. Acidicus laughed as the four ninja began sinking on a log in an acid lake. However, Samurai X appeared, providing a rope for the ninja to escape on and attacking the Venomari, forcing them to retreat.

When Pythor discovered the Lost City of Ouroboros, he summoned the rest of the Serpentine and challenged Acidicus and the other Serpentine generals in the Slither Pit to claim the title of Snake King. Acidicus was punched in the face early on but seemed to gain the upper hand when he, Skalidor, and Fangdam tackled Pythor simultaneously. However, the cunning Anacondrai uses the Sacred Flute to incapacitate the generals (save Skales, who was secretly allied with him), and promptly defeated them with ease, with Acidicus being backhanded to the ground as he reeled in pain from the Sacred Flute's music.

The generals began to question Pythor's plans, deciding to take their staffs back. When Skalidor accidentally hit Acidicus over the head with his staff, the two dropped their staffs as they engaged in a small fight. However, the venom from the five staffs spilled onto the floor and mixed, giving Pythor the idea to drip the venom of each general's staff onto a sheet of paper, which revealed a map of the Fangblade locations.

While Pythor searched for the last Fangblade somewhere in Ninjago, Acidicus waited in Serpentine's underground fortress with the rest of the generals. He appeared somewhat skeptical about the existence of the Great Devourer, commenting that he was curious to see what would happen when the Fangblades were united in Ouroboros. Later, after Pythor returned with the final Fangblade and imprisoned the ninja (who were attempting to steal the other three), Acidicus was among the Serpentine reluctant to leave for Ouroboros immediately, suggesting that they at least celebrate capturing the ninja.

(NOTE: The episode shows Skalidor speaking when the Serpentine hear the people's cheers above ground, but the line is delivered in Acidicus' voice, implying that the Venomari General was supposed to be the speaker.)

Acidicus was present with the other generals when Skales suggested that he be crowned their new leader. The Serpentine ultimately decided to ally with Lord Garmadon, abandoning Acidicus and the other generals. Acidicus suggested a plan to release a swarm of evil bees to stop Garmadon, but Skales turned it down by pointing out how ridiculous that was. Skales later devised a plan to kidnap Lloyd in an attempt to blackmail Garmadon into allowing him leadership of the Serpentine. Acidicus caught Jay eavesdropping on the Serpentine's plan and had him tied up in the subway.

As part of the plan, Acidicus, along with Fangtom and Skalidor, robbed the Ninjago City Bank to distract the ninja. Kai, Cole, and Zane chased the Serpentine into the subway, where they attempted to escape aboard a subway train. A fight between the generals and the ninja ensured, wherein the generals managed to escape as the ninja attempted to stop the train from running into Jay.

Acidicus and the other remaining generals soon joined up with Lord Garmadon who presented them with his new Mega Weapon, though the Venomari doubted that Garmadon knew how to use the weapon. Garmadon eventually did figure out how to used it and inadvertently brought Captain Soto's crew back, who in turn took over the ship and threw Acidicus and the other serpentine into the brig. After the ninja dealt with the Pirates, the Serpentine reclaimed the ship and Acidicus stood by Garmadon as he mocked the ninja.

After breaking Skales out of jail, Skalidor drove with the Serpentine generals in the Ninjaball Run race.

After Garmadon convinced the Serpentine generals to help him find the Dark Island, they followed him. When Skales pushed him off the Rattlecopter, the generals are glad to have Skales back as the leader and bows before him.

Acidicus and the other Serpentine generals returned to Ouroboros where they crowned Skales the new snake king. They along with the rest of the Serpentine then proceeded to burrow under Ninjago City to carry out Skales's first order to take back Ninjago as their own. However, their plan failed as they came across the tomb of the Stone Army just as it was awaking due to venom of the Great Devourer. The Serpentine rushed into battle, but upon realizing that the stone warriors were indestructible, Acidicus advised that they retreat. Skales, however, insisted they remain and fight, though the Stone Army overpowered them and left the tomb, trapping the Serpentine in there instead.

When the ninja came to the Serpentine village in search of answers about a scale they found during a previous battle with the Overlord's nindroids, Acidicus told them of the Serpentine legend, the curse of the Golden Master.

Acidicus fought alongside the Elemental Masters at the Corridor of Elders and helped defeat Chen's fake Anacondrai army.

Skales takes Jay, Kai, and Cole to Acidicus to the Serpentine library, where he tells them the tale of Aspheera and the treacherous deceiver.

Acidicus is a very proud general of his tribe. He once fought for this position and does not intend to give it up easily, as he told Pythor.

After being locked in the tomb of the Stone Army, Acidicus changed completely and began to pursue his hobby, books. At first, this activity only led him to tell stories and legends, and later even to open his own library, where he became a librarian.

Acidicus has white spikes on his head, tusk-like fangs, and four yellow eyes, two of them smaller than the others. His body is dark green with black, red, and lime-green markings.

Acidicus is as dangerous as the Toxic Bogs the Venomari call their home. Victims who have been hit by the Venomari venom hallucinate and sometimes see their worst fears materialize before them.

General Acidicus is the brains of the otherwise intelligently challenged Venomari. He has cleverly constructed vials the Venomari can use for carrying extra venom in their combat gear, so they never, ever run out of venom in battle. He strongly supports Pythor’s efforts to unite the tribes and rule the world.[link unavailable]

General of the Venomari, Acidicus is very crafty. He has constructed special vials that the Venomari use to carry extra venom in their combat gear, so they never run out of poison in battle. How brilliantly evil! However, no one knows where clever Acidicus keeps his own vials - maybe there are pockets in his tail!

Acidicus' name is based on the word "acid" or "acidic", and possibly the name "Atticus". 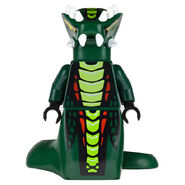 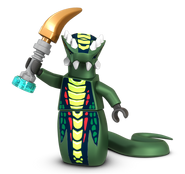 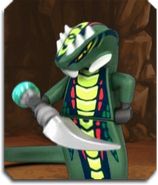 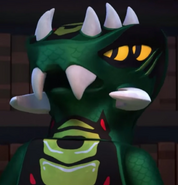 As he appears in The LEGO Ninjago Movie Videogame