Airjitzu (referred to by Jay as Cyclonedo) is a martial arts technique that was created by Master Yang. It involves the user tapping into their innate elemental energies while spinning rapidly, creating a tornado-like vortex of energy around themselves which also allows them to levitate over land.

It is similar to Spinjitzu, which Yang used as inspiration to create the air-based technique.

Airjitzu grants the user the ability to fly in a small vortex of a specific element and color around themselves in the form of a single, short burst for under ten seconds.

Later on, after Kai secured the Sword of Sanctuary, he used Airjitzu to reach the Destiny's Bounty 2.0.

After Lloyd managed to break the Ninja free, he, Kai, Zane, and Jay (who carried Nya) used Airjitzu to escape "The Hole."

After Jay made his final wish for the Teapot of Tyrahn to have never be found, the six Ninja use Airjitzu.

The following events occur after Jay made his final wish, and, thus happened.

After Jay and Nya were knocked off the Destiny's Bounty by an unnatural storm they used Airjitzu to safely land on the Dark Island. The two would later use Airjitzu to battle a Leviathan.

When Wu and Lloyd fell into quicksand after being chased by a pack of gorillas, Wu used Airjitzu to pull them out.

Under the influence of Dark Matter, Lloyd used Airjitzu to hop from the Destiny's Bounty onto the mainland.

Cole used Airjitzu to fly up to the Temple of Airjitzu.

When Zane was confronted by Cryptor, he attempted to use Airjitzu to escape.

Cole and Jay suggest using Airjitzu to get out of the building with the kidnapped builders, but they then realize that the builders don't know Airjitzu. 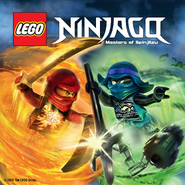 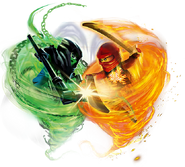 Kai in the Airjitzu commercial 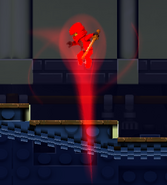 As seen in Ninjago Rush 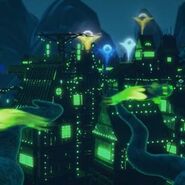 Kai, Zane, Cole, and Jay's Airjitzu in their elemental colors 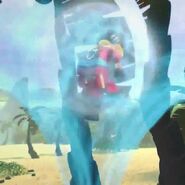 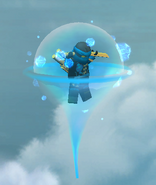