An Underworldy Takover is the fourth of six Mini-Movies, taking place directly after the Pilot Episodes of LEGO Ninjago: Masters of Spinjitzu. It details some of Lord Garmadon's past, explaining how he gained command of the Skulkin army after his first defeat by his brother that cast him into the Underworld.

Master Wu is preparing some tea when Cole enters with a question: how did Lord Garmadon take control of the Underworld? In response, Wu has a flashback to the night that Garmadon tried to steal the Golden Weapons, which ended with a battle between brothers and Garmadon's fall to the Underworld.

As Garmadon shouts promises of vengeance at the darkness overhead, he is confronted by Samukai and the Skulkin army. Samukai declares that he had known that Garmadon would return to the realm of the dead at some point, and that he was looking forward to paying him back for the last time Garmadon and Wu had clashed with the Skulkin. As Samukai draws his daggers, Garmadon declares that the prospect of revenge would be a good start.

The two fight as the Skulkin army looked on, but Garmadon quickly gains the upper hand, knocking Samukai's helmet off of his head. As the four-armed skeleton attempts to recover, Garmadon uses his Spinjitzu to create a tornado of Destruction, sucking Samukai's daggers out of his hands and throwing them back at their owner.

Luckily for Samukai, Garmadon intentionally missed his body, instead pinning him to the wall with his own knives. As the skeleton admits defeat, Garmadon places Samukai's helmet on his own head, declaring that there were going to be some changes in the management of the Underworld.

Master Wu is shaken from his flashback by Cole, who notes that his mentor still hasn't answered his question. Wu simply informs Cole he assumes that Lord Garmadon and Samukai came to a mutual agreement over the matter. 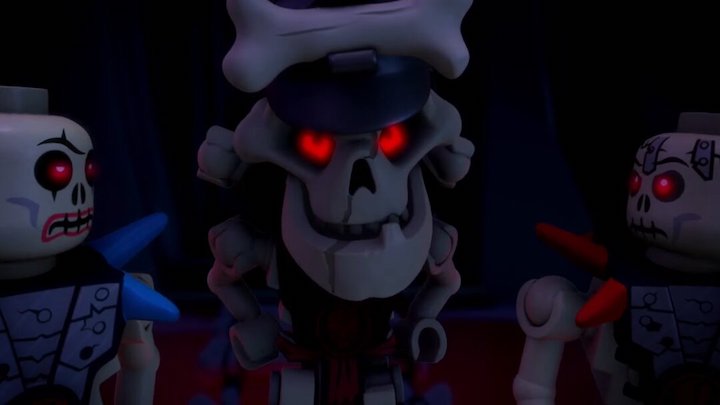 Garmadon after he fell.

Add a photo to this gallery
Retrieved from "https://ninjago.fandom.com/wiki/An_Underworldly_Takeover?oldid=385693"
Community content is available under CC-BY-SA unless otherwise noted.