Extinct except for Pythor
The Anacondrai were one of the five Serpentine tribes living in Ninjago and were the most powerful, dangerous, and feared of all Serpentine, acting as the fiercest warriors of their time under the lead of General Arcturus. During the Serpentine War, the Anacondrai led their kind in the battle against the people of Ninjago. Master Chen played a part in fueling the conflict and driving both sides against each other. After the Elemental Masters won the war, the Anacondrai were sealed away in a large tomb in the Sea of Sand, while Arcturus and his generals were banished to the Cursed Realm.

Lloyd Garmadon would later open the Anacondrai Tomb, hoping to ally with those inside, yet he found the sole survivor to be Pythor, who had eaten his fellow warriors in order to survive. Lloyd allied with Pythor until Pythor betrayed him and reunited the Serpentine. Pythor would go on to unleash The Great Devourer and work with The Overlord to transform him into the Golden Master. While he succeeded in doing both, the Devourer and Golden Master would be destroyed, and Pythor was locked away in Kryptarium Prison.

Chen's criminal empire had grown over the years, and he succeeded in transforming him and his followers into Fake Anacondrai. The Ninja set off to find Pythor and protect him from Chen's cult, as they needed the essence of a true Anacondrai to complete the transformation spell. The cult managed to capture Pythor and make their transformation permanent before setting off to battle the Elemental Masters at the Corridor of Elders. However, Pythor had a change in heart and offered a means of defeating Chen's army. Garmadon thus sacrificed himself to summon the spirits of Arcturus and his fellow Anacondrai generals, who banished Chen's army to the Cursed Realm as punishment for their arrogant mimicry of their race.

The Anacondrai were created by the First Spinjitzu Master alongside the Hypnobrai, Venomari, Fangpyre, and Constrictai as the strongest of the five tribes. They would go on to act as the leaders of the Serpentine, and would later heed the coming of the Golden Master, fearing his arrival greatly.

As a result of their paranoia, the Anacondrai and the rest of the Serpentine began to have conflicts with the humans. Eventually, under Chen's influence, they were tricked into believing the humans were planning an attack and promptly struck first, instigating the Serpentine War in the process.

Under the leadership of Arcturus, the Anacondrai would dominate the battlefield, leading the other Serpentine and being assisted by Chen and Clouse. Seeking out Jamanakai Village as one of their targets, they drove off the Elemental Masters, unleashing the Anacondrai Serpent to assist in their victory. Later, Chen would rally the Master of Earth to their side, giving them an advantage during the battle of Birchwood Forest.

Due to internal conflicts and possibly Chen's influence, the Anacondrai eventually declared war on the rest of the tribes, sparking a civil war among the Serpentine. This infighting, coupled with Garmadon's creation of the Sacred Flute, led to the Serpentine's defeat at the Corridor of Elders. Whilst Arcturus and his generals were banished to the Cursed Realm, the rest of the tribe was locked inside a tomb within the Sea of Sand.

Decades later, due to a lack of food, the Anacondrai were in danger of starvation. Eventually, they resorted to eating each other alive, leaving no trace of them save for their bare skeletons and the lone survivor, Pythor.

Lloyd, in an attempt to get revenge on the Hypnobrai, opened the Anacondrai's tomb, only to discover Pythor as the lone living occupant. Even as Pythor lied about the circumstances of his tribe's death, leaving out their attempts to devour each other, he proceeded to leave the tomb and later return briefly to celebrate over his and Lloyd's stolen candy stash.

The Anacondrai had purple skin, with some parts of their bodies being black. Unlike the other tribes, however, Anacondrai all had tails, and there was little to no difference between individuals. At the same time, the Generals (the Anacondrai were the only tribe to have several Generals) had regal body attire (similar to Clouse's) and red armor like Zugu's. The Generals also had black markings on top of their heads, with five of them sporting red eyes, while Arcturus, the main General, had green eyes and golden armor/attire.

Pythor does not have any armor or clothing like his ancestors did, as well as a unique head shape and longer neck compared to his other Anacondrai brethren.

It is assumed that when an Anacondrai's skin is bleached, it turns white and their markings become purple.

Chen and his Anacondrai followers would later become Fake Anacondrai. These "Anacondrai" are nearly identical to the real counterparts, except they lack their black markings.

Unanimously considered to be the strongest Serpentine tribe and even the greatest warriors in all of Ninjago, the Anacondrai were famed for their enormous strength, prowess in the battlefield, tactical skills, and ruthlessness. As a result, they took command of the Serpentine tribes during the Serpentine War, and even after the tribes were split apart were nevertheless dreaded by their brethren.

Like the rest of the tribes, the Anacondrai had prolonged lifespans and some form of venom, although the effects of the latter remain unknown. They possessed great speed and strength, being able to catch a Master of Speed off-guard and overpower a Master of Earth in hand-to-hand combat. Their heavily-armored scales made them invulnerable to nearly any attack and could withstand Elemental powers. However, as a result, no Anacondrai would be able to express any inherent Elemental abilities; despite this, they were still deemed to have no flaws or weaknesses.

All Anacondrai had long, snake-like tails that they used to whip opponents or restrain them in combat. They could also turn invisible and were resistant to lethal toxins. Their weapons of choice were Anacondrai Blades, said to be the sharpest weapons in all of existence, and their higher-ranking members wore armor to both denote their rank and further augment their great durability. Unstoppable in combat, the Anacondrai were so powerful that they nearly won against the humans (including the Elemental Masters), Hypnobrai, Fangpyre, Constrictai, and Venomari.

Their tomb is located in the Sea of Sand, inside a giant fang-shaped stone structure. 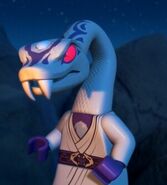 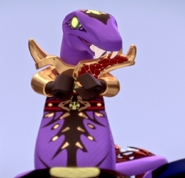 Anacondrai Generals
Add a photo to this gallery

The Anacondrai under the effect of the Sacred Flute

Under the control of the Sacred Flutes.

Sealed away with Pythor

The Anacondrai tribe (with Pythor) being sealed in their tomb

Clouse's pet about to try and devour the Ninja

Chen'rai With Pythor
Add a photo to this gallery