Ninjago Wiki
Register
Don't have an account?
Sign In
Advertisement
in: Ninjago, 2015, Ninjago: Masters of Spinjitzu,
and 6 more
English

The Greatest Fear of All
30291 Anacondrai Battle Mech

Unknown
The Anacondrai Battle Mechs were mechs that were used by the Anacondrai Cultists when they were trying to capture Pythor.

As Lloyd, Garmadon, and Wu try to escape Kryptarium Prison with Pythor, they are surrounded by Anacondrai cultists, who used the mechs to battle against them. 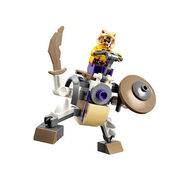