Unknown (original)
Intact (replica)
The Anacondrai Staff is one of the five Serpentine Staffs. Like the other staffs, it served as a weapon and symbol of its corresponding tribe's general—in this case, the last living Anacondrai, Pythor.

Like all Snake Staffs, the Anacondrai Staff has a capsule of anti-venom on its head, which upon being ingested makes the user temporarily taste so bad that even an Anacondrai would be unable to swallow them.[1] When mixed with the anti-venom of the other four Snake Staffs, a white liquid is formed that creates a map to the Fangblades.

It is unknown what happened to the original staff following the awakening of the Great Devourer, though sometime later a replica of the staff would be held by a statue of Pythor in the Ninjago Museum of History's Hall of Villainy.

Pythor combined his staff with the other ones to find the location of the Fangblades, which they would eventually succeed in obtaining and using to awaken the Great Devourer.

Pythor used his staff to retrieve one of the Fangblades from the lava.

Pythor held the staff along with the Four Silver Fangblades while he was at Serpentine's underground fortress.

Using it to defend himself against Wu during their battle, Pythor was able to successfully bat aside the former's Spinjitzu tornado with his staff. After the Serpentine Train's front car crashed, Pythor left the staff behind in favor of carrying the Fangblades.

Later, a replica of the Staff was put on display alongside a mannequin of its most recent user, Pythor, in the Ninjago Museum of History's Hall of Villainy exhibit.

On the Day of the Departed, Pythor stole the staff from the exhibit shortly after the spirits of the Ninjas' old enemies were resurrected through their own statues. The villains, along with Pythor, traveled across Ninjago to have revenge.

Pythor went to the Corridor of Elders to confront Lloyd and Misako, using the staff to fight the Green Ninja. Early in their fight, Pythor threw the staff at the head of a samurai monument, which broke off and nearly crushed Lloyd. As Lloyd held the weight of the head, Pythor attacked Misako using the staff until Lloyd used Spinjitzu to escape being crushed. Lloyd and Misako then leaped across the heads of the monuments, with Pythor following them before winding up on Garmadon's monument. There, Misako knocked the staff out of Pythor's hands, and it fell to the ground far below.

Lloyd and Misako confronted Pythor, who jumped off the monument and landed on the ground. Weak and injured, Pythor hobbled off and used the staff as a cane.

Snake staff of the Anacondrai tribe and a symbol of the power of the Anacondrai general. It is designed to look like a snake wound around a pole, with the purple symbol of the Anacondrai on the snake’s chest. It is one of five staffs in existence, one for each Serpentine tribe. Concealed within the staff is a vial of anti-venom, which causes the user to temporarily taste so bad that even an Anacondrai will not swallow them. When the anti-venom is combined with that of the other four staffs, it creates a white liquid which provides a map to the location of the Fangblades.[1]

Pythor may be the real thing, but the Anacondrai Snake Staff he wields is not. Like the other villains themselves, it is a museum prop infused with the energy and spirit of the original weapon. Of course, this makes it just as dangerous. Pythor wonders what the capsule of anti-venom in the head might do now, but he doesn’t intend to find out.[2] 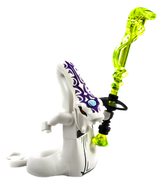 Pythor and his staff

The real Pythor gazing upon his statue, which holds a replica of the staff.

Pythor wielding his statue's staff in "Day of the Departed."

Note the Fangpyre's symbol in the anti-venom capsule.