View source
watch 01:25
Jurassic World: Dominion Dominates Fandom Wikis - The Loop
Do you like this video?
Play Sound
“He's not a snake, Master, he's a serpent. And might I remind you my pet never betrayed us.”
— Clouse to Chen, "The Day of the Dragon"

Deceased
The Anacondrai serpent[1] was the pet of Clouse. It inhabited the caves below Chen's Island that lead to the Underground Noodle Factory and the jail cells.

The Anacondrai serpent would help the Serpentine capture Jamanakai Village. During the battle, it attacked the Elemental Master of Gravity, nearly devouring him.[2]

It would later continue to participate in the Serpentine Wars under its master's command. However, following the victory of the humans, it was probably smuggled on an island by Clouse and Master Chen.

After Chen started his noodle chain and grew in power, it would go on to patrol the tunnels beneath his palace, devouring intruders.

When the ninja were escaping the Anacondrai Cultists in the tunnels beneath Chen's palace, the Anacondrai serpent attacked them, though they managed to escape. However, the serpent had managed to rip off a scrap of clothing that Jay was wearing. It brought it to Clouse, who used it to identify the ninja.

After Jacob was caught trying to escape the noodle factory, he was assigned to feed the Anacondrai serpent its meals as punishment.

When Cole escaped and freed Zane, the Anacondrai serpent chased the duo, trying to trap them by coiling its body through all of the exits. However, the two would escape through the ground, leaving the serpent behind.

While running, Lloyd fell into the caverns and was chased by the serpent, only for Kai to save him. After Garmadon and Nya were captured, they were chained to posts to be fed to the Anacondrai serpent. Arriving for its meal, it circled the two of them menacingly. Before it could devour the two, however, the Elemental Masters broke into its lair using the Roto Jet, firing several missiles. This caused piles of debris to collapse on the serpent, killing it.

While discussing their next plan of action, Chen and Clouse visited the Anacondrai serpent's lair. Clouse would caress his beloved pet's corpse, assuring his love for it before swearing vengeance on Garmadon for the ninja's actions. During the end credits, Jacob tried to feed the serpent, not knowing that it was dead.

The serpent serves as a boss in "Elements of Surprise" along with Saruman. In the game, the serpent appears to be mostly made of LEGO bricks.

The Anacondrai serpent is purple and appears to have a spiked rattle on its tail. It also has blue and lavender scales on its forehead. It has bright pink eyes and large fangs.

It appears to be similar in size and shape to a smaller Great Devourer.

Clouse with his serpent

The serpent approaching Zane and Cole 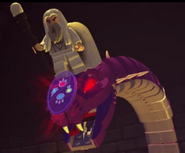