View source
“But what I want to say to the fans of Ninjago is that I am honored to be a part of the show. You know, playing Morro was a joy, it was super fun, playing all the little fun bad qualities, the bad guy-ish qualities that Morro had, and Beta Jay, you know, the different characters throughout the seasons. But I want to tell the fans that I am going to do the best that I can to be the best Cole that I, Andrew Francis, can be.”
— Francis in an interview with Brent Miller[1]

Alive
Andrew Michael Scott Francis (born May 27, 1985) is a Canadian voice actor who provided the voices for Shade, Morro, the Magician in Episode 45, the Ship Captain in Episode 54, Benny, Beta Jay 137, and Cole from Season 15 onwards[2] in Ninjago. 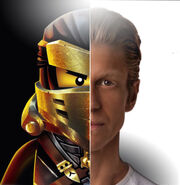