Dareth challenges one of the Ninja to a battle to see if they are worthy to train in his dojo, and he shows off his Animal Fighting Style techniques, but he is easily defeated by Kai's Spinjitzu. Later when he ambushes the pirates on their ship and fails, he is forced to walk the plank. As Dareth approached his inevitable doom, he called upon the power of the Dragon, and at that moment, Lloyd and the Ultra Dragon flew in to rescue him.

Dareth threatens the Overlord by saying he will unleash the power of the Dragon and the Penguin but flees when the Overlord shoots Dark Matter missiles at him.

When the Ninjago City Aquarium's tank broke, Dareth used the martial art to defend Sally from a shark.

Dareth jumps off a building and tries to "unlock" his Elemental Dragon, though Ronin flies in to save him.

When Dareth got into a boxing ring with Karlof, he tries to defeat him by using the Cheetah and the Fish. 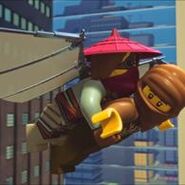 Add a photo to this gallery
Retrieved from "https://ninjago.fandom.com/wiki/Animal_Fighting_Styles?oldid=427564"
Community content is available under CC-BY-SA unless otherwise noted.