View source
watch 01:25
Jurassic World: Dominion Dominates Fandom Wikis - The Loop
Do you like this video?
Play Sound
“We paperboys gotta stick together. The city's crazy, but everyone's doing their part. We may not be ninja, but our job's important, too. People gotta know what's going on.”
— Antonia to Nelson, "The News Never Sleeps!"

Brynna Drummond
Antonia (sometimes called Ton for short) is a papergirl, who guided Nelson on his first day. She is seen to be good friends with Nelson and is often seen with him when they are not delivering newspapers.

After their boss made some announcements, Antonia was paired up to help Nelson as his first day as a paperboy in Ninjago City.

She casually hands out papers while the city is under attack by Elemental Cobras. She told Nelson to do the same, much to his confusion. They eventually watched as Samurai X fight off some of the snakes and continued their route.

During their break, Antonia informed him that Ninjago is always under attack. She then offers him a sandwich after his got hit by a fireball. She then has a pep talk with Nelson, and he was able to get around the city easier.

After delivering some papers, they see Clutch Powers fall from the sky and made sure he's not hurt. Clutch then tells them that the ninja are trapped in a pyramid before fainting and being sent to the Hospital. Antonia says he'll be fine, but Nelson convinced her they need to find help at the Monastery of Spinjitzu.

She encouraged Nelson to cross Route 23, which is a "quadruple black diamond" according to their boss. They arrived at the Monastery, and she watched as Nelson told Wu about the ninja's whereabouts. They then rode back down the mountain.

Antonia was riding her bike with Nelson and Leroy.

Antonia was among the students learning to dance in Vlad Tutu's dance class and partnered up with Nelson.

Antonia and Nelson were doing their daily routines of delivering newspapers throughout Ninjago City before fist-bumping upon completing it. Later, she went to Benny's Arcade Emporium and was present when Prime Empire interrupted every screen.

Antonia was lined up along with the other kids waiting to play Prime Empire.

When their boss announced Antonia was quitting, everyone disbelieved it, until she told them she got a new job at Dairy Dragon, but only Nelson was still disappointed as she was the one who taught him about being a paperboy. She was able to convince him that he can get all the ice cream he want before coming across the Explorer's Club building, where Kai, Cole, Wu, Misako, and Ray were battling Kalmaar and the Merlopians to prevent them from taking the Storm Amulet, which she retrieves before escaping with it alongside Nelson with Kalmaar pursuing them. During the chase, Kalmaar commandeered a garbage truck, which he used to pursue them, briefly interrupted by Kai's interference before coming across a drawbridge, which they manage to jump as it was rising while the truck, with Kai and Kalmaar still inside, landed and sunk into the canal. Managing to seize from her and Nelson, Kalmaar asked some questions about her before becoming amused at being told she was a papergirl and dives into the canal to escape. Antonia then dove in to retrieve Kai for Nelson to resuscitate him before Cole, Wu and Ray show up. Inspired by being thanked for her attempt to keep the amulet away from Kalmaar, Antonia decided to stay being a papergirl.

Antonia attended the ninja's memorial they held for Nya.

Antonia was at the Ninja's trial, sitting next to Nelson.

Antonia is a girl with black lipstick and short, dark red hair that is swept to one side on the front and has a few black streaks. She wears a black shirt with a white lightning bolt symbol, a tan jacket with a red "X" on the right side on it, short blue shorts with black stockings underneath, and maroon boots with black shoelaces.

Antonia is a laid back and carefree person, who does not fear the danger that roams around Ninjago City, as she remains calm all throughout. She appears to be rather sporty and audacious in performing her stunts as shown when successfully attempting risky tricks on her bike. This is further unveiled when she was brave enough to stand up to Kalmaar and his army, alongside the Elemental Cobras. During those events however, she can be hesitant in involving herself in serious situations, wanting to avoid any trouble that could cost her, but it does not stop Antonia from doing the right thing as she continues to help out in any way she can.

Her connection with Nelson also softens her tough exterior as displayed when giving him, her Sandwich when his got burned, encouraging his self-esteem whenever he lacked confidence, and watching over his back when he gets overwhelmed by pressure and fear. On the other hand, she seems to hold some display of a toned down attitude and diffidence when first presented to others. This was seen when she didn't speak to Nelson right away the first time they met, letting him enlighten Wu of the Ninja's whereabouts instead of her, and shyly informing the Ninja about Kalmaar's trail.

Brent Miller's screenshot of one of her lines 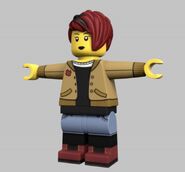