Ninjago Wiki
Register
Don't have an account?
Sign In
Advertisement
in: Ninjago, Ninjago: Masters of Spinjitzu, 2015,
and 17 more
English

View source
watch 01:25
Jurassic World: Dominion Dominates Fandom Wikis - The Loop
Do you like this video?
Play Sound
“Too bad I don't have my powers. I would create a smokescreen to blind them while we steal it.”
— Ash in Breakout!

Brent Miller
Ash is the current Elemental Master of Smoke and was a fierce competitor in Master Chen's Tournament of Elements, alongside the other Elemental Masters of his generation. In the third round of the event, Ash fought against Kai inside a volcano, where he proved himself to be a dangerous and very skilled adversary. After a long fight, Kai claimed the Jadeblade and defeated Ash. Afterward, he was ridden of his powers and forced to work in Chen's noodle factory. Later, Ash would ally with the other Elemental Masters to reclaim their elements.

Ash and the Elemental Masters united against Chen, who completed a spell that transformed him and his followers into fake Anacondrai. Consequently, an ancient conflict was renewed, as the new alliance of Elemental Masters fought Chen's army at the Corridor of Elders before Garmadon sacrificed himself in a bid to banish their adversaries to the Cursed Realm.

Months later, Nadakhan imprisoned Ash and the other Elemental Masters in his Djinn Blade, though these events were erased after Jay made his final wish.

Ash was born as a descendant of the previous Elemental Master of Smoke. At some point, he unlocked his True Potential.[1]

Ash was one of those invited to participate in the Tournament of Elements. He accepted and came to Ninjago City pier, where he was picked up by Clouse to be taken to Chen's Island by a ferry.

After arriving on the island, Ash participated in the hunt for the Jadeblades, he was seen fighting Lloyd for the blade but failed.

However, he managed to obtain another blade, allowing him to stay in the tournament.

Kai flips himself back onto secured planks and uses his Spinjitzu to push Ash back, though the end result is the same. Kai then launches multiple fireballs, only for Ash to dodge them while they begin burning through the bridge. Ash manages to apprehend Kai, but he launches one more fireball in which he successfully burns through the last of the bridge, sending both of them onto the rocks below. The two then battle in midair over the Jadeblade, where they are shown to be evenly matched until Ash goes for the Blade.

Kai then attacks him, where he uses his powers to avoid being hit by the fire. Unfortunately for Ash, Kai uses this as his chance to take the Blade and end the match with Ash being eliminated and falling in a trapdoor.

Sometime after, Ash was stripped of his power and forced to make noodles for Chen in Chen's factory along with the other powerless masters.

Ash continued working until the Cultists shut down the factory and watched as Cole and Zane emerged from hiding as they explained their plan to escape the noodle factory through the sewer network. After Zane suggested they build a Roto Jet to blast their way out, Ash helped find spare parts throughout the factory.

Ash is seen as one of the Elemental Masters pushing the Roto Jet, which allowed the masters to break out of the factory.

Ash was later among the Elemental Masters as they rebelled against Chen and his Anacondrai warriors. When Kai destroyed Staff of Elements, the Elemental Masters regained their elemental powers and easily fought off Chen's forces, who would retreat while Ash and his comrades took control of the island.

Ash and the other elemental fighters battled with Chen's followers who were turned into Anacondrai. Later, cultists escaped with the intent of conquering Ninjago. When seeing Kai and Zane awaken Elemental Dragons, Ash hugged Chamille, and later awoke his own Elemental Smoke Dragon and headed after Chen's army with the other fighters.

Ash used his Elemental Dragon to fly back to Ninjago City and was told by Lloyd to keep watch over the city.

Later on, Ash and the other Masters stand ready to hold off Chen and his forces, who have gathered in noodle trucks, but they are surprised when the trucks scatter to various locations. They each pursue a truck only to find them empty and realize Chen separated them to invade without hindrance. The revelation that they put many people in danger causes them to lose control of their elemental dragons.

After receiving a message from Neuro, Ash gathered with the Elemental Masters at the Samurai X Cave, where they discussed what to do about Chen before deciding to make their stand at the Corridor of Elders. Ash then fought in the battle at the Corridor of Elders against the Anacondrai warriors before watching them being banished to the Cursed Realm by the spirits of the Anacondrai generals.

At the end of the battle, he and the other Elemental Masters celebrate with the ninja, promising to offer them future aid.

At some point, Nadakhan imprisoned Ash in the Djinn Blade.[2]

Ash has gray hair set in a similar, spiky fashion to Ray's. He has thick black eyebrows and lines on either side of his mouth. His sleeves are gray and he wears black gloves. He has a padded square pattern on his body and brown and gray shoulder pads. He has a large belt with a gray buckle and a brown interior. His legs and waistline have silver chainmail-like material on them.

With the ability to transform into vaporous smoke, it is hard to get your hands on this shady opponent, much less placing a finger on where his loyalty truly lies. The master of smoke is as enigmatic and hard to predict as the patterns made by rising smoke.[3]

Ash's minifigure (without his hood)

Ash behind Jay in the Tournament of Elements mural

Ash using his element to turn into smoke

Ash among the other Elemental Masters making a plan of escape

Ash on his dragon 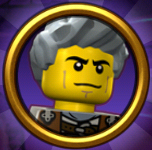 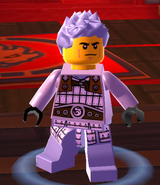