Aspheera is the leader of the Pyro Vipers and a Serpentine sorceress. In her youth, she forged a friendship with a young Wu in a bid to learn Spinjitzu and secretly overthrow Mambo the Fifth. After Wu used Forbidden Spinjitzu to defeat her, Aspheera was imprisoned in the Ancient Pyramid for a millennium, after which she was accidentally freed by the Ninja. She promptly stole Kai's element, allowing her to reignite her forces.

Immediately, Aspheera swore revenge on Wu and sieged Ninjago City with a legion of Pyro Vipers and Elemental Cobras. Eventually, her rampage reached the Samurai X Cave, where she attacked Wu and the Ninja. Using the second Scroll of Forbidden Spinjitzu, the Ninja were able to incapacitate Aspheera - but not before she banished Zane to the Never-Realm. Aspheera is currently incarcerated in Kryptarium Prison.

A thousand years ago, she encountered the young Wu and Garmadon after they trespassed into Serpentine territory and were imprisoned. Aspheera told them of how she was training to be a sorceress and offered to free the brothers, in exchange for them helping her in the future, they agreed. Aspheera freed them and told them to keep their promise in due time.

Wu later returned to uphold his end of the deal, and she and Wu became friends. He taught her Spinjitzu. However, Aspheera's learning of the art along with her sorcery enabled her to usurp the previous Serpentine Ruler, Mambo the Fifth. Aspheera used her sorcery and knowledge of Spinjitzu to invade Ninjago, which she intended to take over. She was confronted by Wu and his brother. They fought, Wu using the Scroll of Forbidden Spinjitzu to have an edge against her and his brother similarly using it to defeat her minions. Aspheera was angered that Wu had betrayed her by not showing her this art and by standing against her. Aspheera was subsequently imprisoned after Mambo took back power. Wu visited her in her cell, where he tells her that she and the vipers are to be imprisoned in the Ancient Pyramid. She pleaded to Wu to free her as she had him and his brother. Her pleas fell on deaf ears and she swore revenge on the "Deceiver." At some point, her punishment was carried out and she was left to rot in the long-abandoned pyramid.

Aspheera appears in Zane's dream, entering the Monastery of Spinjitzu and propelling Zane back with a blast of fire. When being asked what she wanted, she replies with "revenge."

When Gayle Gossip was done with her interview with Clutch Powers, the camera zooms in on a tablet that shows Aspheera.

She appears in another one of Zane's dreams, this time fighting him in the cave beneath the Monastery of Spinjitzu.

When the Ninja solve the puzzle, Aspheera is released from the tomb and begins fighting the Ninja, exclaiming that she wants revenge on the person who trapped her there. At first, she appears de-powered and has blue skin. She then begins to extract power from Kai, and she powers up, becoming golden. She also uses Spinjitzu to combat the Ninja. After powering up, Aspheera quickly chains the Ninja. She then causes the pyramid to erupt and climbs onto the Fire Fang's throne.

Aspheera arrives in Ninjago City and begins to communicate with the other Pyro Vipers. She notices a sign advertising an exhibit for the Scroll of Forbidden Spinjitzu at the Ninjago Museum of History. She declares that she will use it to exact revenge on the "traitor" who locked her away. She soon notices Gayle Gossip and Vinny nearby and interrogates them on the location of the museum. Gayle refuses to tell her, instead telling her that the Ninja will stop her. However, Aspheera tells her that they are trapped in the pyramid and demands the location of the museum. Gayle refuses, as Aspheera became angry but Vinny promptly tells her its three blocks ahead.

Aspheera has them captured and their cameras continue broadcasting her actions.

Now that Aspheera has Gayle and Vinny hostage she makes them take her to the Ninjago Museum of History to find the Scroll of Forbidden Spinjitzu. When they arrive Aspheera doesn't see the Scroll and starts to destroy artifacts. She then revives Char, who then leads her to the Scroll. When they arrive at the room with the scroll, Aspheera is angrily surprised to see that the Ninja have escaped the erupting Ancient Pyramid. The rest of the Ninja (except Kai) fight off the Pyro Vipers as Aspheera and Lloyd fight for the Scroll. In the end, Aspheera manages to get the Scroll and then traps the Ninja under rubble as she tells three Elemental Cobras to finish them.

Aspheera leaves the Museum mounted on the Fire Fang, unknowing that the Ninja have successfully survived the battle. She tells the Fire Fang to lead her to the treacherous deceiver upon which it heads to the monastery. Nya distracts Aspheera long enough for Lloyd to try to get the Scroll of Forbidden Spinjitzu. They then fight but she successfully defeats Lloyd continuing on her way to the Monastery.

Aspheera found Wu and Garmadon locked up in a cell. She promises to free them in exchange for Spinjitzu lessons. They agree, and the brothers run home for the night.

The next day, Garmadon did not keep his promise, but Wu did. He made her promise not to use Spinjitzu for evil, and she nodded. They trained for weeks until she learned Spinjitzu.

Now with Spinjitzu, Aspheera has overthrown the king and is about to take over Ninjago. However, Garmadon and Wu stole the Scrolls of Forbidden Spinjitzu and easily overpower her. She was placed in a cell that cannot be opened with magic.

Aspheera was on top of the Fire Fang, spewing fireballs and Elemental Cobras approaching the Monastery. After reaching the Monastery, Aspheera told the Fire Fang to destroy the temple's doors. P.I.X.A.L. then activated Water guns and rubber Shurikens to stop the Elemental Cobras from burning down the doors. Aspheera uses her staff to get rid of defense weapons. When the Fire Fang destroys the doors, the Ninja are forced to retreat to the Underground Base. Once the Pyro Vipers go inside, Aspheera tells them to find Wu. Having no luck in finding him, Char complains that they can't find him and suggests that they should give up. Aspheera ejected fire at Char but misses, hitting the dartboard that opens to the Underground Base instead. Once Aspheera saw the elevator, Char presses the button and they both wait for the elevator to open, but it couldn't due to Aspheera accidentally eradicating the button.

Alerted by Jay's sneeze, she finds Wu and the Ninja hiding under the vents. She remarks on how she dreamed of this moment before P.I.X.A.L. knocks her away in the Titan Mech. She overcame P.I.X.A.L. and held the Ninja and Wu hostage. Aspheera gloated on her imminent success before the other Ninja arrives with the other Scroll of Forbidden Spinjitzu.

Aspheera was shocked that they found the other scroll and duels the empowered Lloyd before knocking the scroll away from him. Every time a Ninja was defeated, another Ninja grabs the Scroll and fights her. She overpowered them each until Zane dueled her and froze her. Not one to be denied vengeance, Aspheera took her free arm with her staff to aim one last shot at Wu. Zane intercepts it and is seemingly destroyed.

After the battle, Aspheera was arrested and held in Garmadon's old cell at Kryptarium Prison, drained of her stolen powers. She is visited by Wu, remarking on how he visited her like last time. An infuriated Wu criticized her, as her vendetta cost him one of his pupils and asks if she is satisfied with her deed. The confused Aspheera reveals that she never wanted to destroy Wu but trap him as he did her. Aspheera states Zane was not destroyed but banished to the Never-Realm, a place that Wu would never be able to save him from. The old master is horrified to learn this and runs out as she taunts him while laughing.

Aspheera appears in P.I.X.A.L.'s nightmare about mistakenly banishing Zane to the Never-Realm. Wu also mentioned that Aspheera told him that she actually sent Zane to another realm.

Kai mentioned Aspheera when he explained to Sorla of how he lost his elemental fire.

When Cole was telling the Ice Fishers' children about Zane's banishment, he used made up puppets of the Ninja and Aspheera.

When seeing Zane as the Ice Emperor, Lloyd brought up the time when Aspheera blasted him. However, as Zane lost his memory, he doesn’t recall this. Moments later, Lloyd gets a flashback of when Aspheera used her staff to banish Zane.

Zane gets a flashback about Aspheera banishing him.

Aspheera is a female serpentine who had a dark teal body and red eyes with orange irises, and looked sort of like an Indian cobra like King Mambo. She has a regal gold, black marking of a bee on her forehead. Her bottom half was a tail while she had arms and hands. She has unique tan and gold robes with golden shoulder armor that are shaped like an Indian Cobra head on each shoulder. After consuming Kai's Elemental powers, she now has yellow eyes with red irises, golden scales, flaming neck scales and a golden and fiery snake tail. 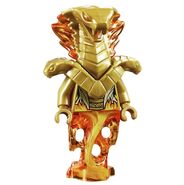 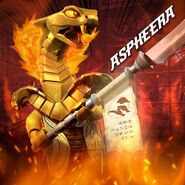 Aspheera with Char
Add a photo to this gallery

Fighting Zane in his dream

Fighting Zane in another dream

The puzzle on the wall

Aspheera upon being released from her tomb