The Council of the Crystal King
70677 Land Bounty

Intact
The staff is a naginata used by Aspheera. The staff has the ability to increase Aspheera's powers so that she can use Magic. After being released from her tomb, she added the Scroll of Forbidden Spinjitzu to the staff, further increasing her powers.

After Aspheera was locked up in Kryptarium Prison, her staff was in the possession of the ninja for a while until they gave it to Cyrus Borg, who placed the staff in the Borg Tower vaults.

A year after the Great Flood, the ninjas stole the staff so that Aspheera could steal Nya's powers. After this incident, the staff was probably returned to the vaults. However, Aspheera acquired a new, purple staff from the Crystal King.

Aspheera used her staff to fight Wu and Garmadon thousands of years ago, but lost. She was later imprisoned with the staff in the pyramid.

In Zane's dream, Aspheera blasted him with her staff on the courtyard of the Monastery of Spinjitzu.

Zane has another dream in which Aspheera attacked him with her staff on the courtyard.

After the ninja released Aspheera from her tomb, Lloyd stated the ninja were unsure who Aspheera was looking for, so she attacked him using her staff.

Aspheera carried her staff while taking over Ninjago City.

Aspheera used her staff to trap the ninja under some debris in Ninjago Museum of History.

On the streets of Ninjago City, Lloyd was able to kick Aspheera's staff out of her hand, but she was able to retrieve it.

Aspheera used her staff to banish the monastery weapons.

Aspheera held her staff while her army was trying to open the hangar bay's doors.

Aspheera attempted to use her staff on Wu, but missed and hit the mech instead. After being frozen in ice, she tried again, but Zane interfered and got hit instead, so he was banished to the Never-Realm.

In an attempt to stop the ninja from going to the Never-Realm after they had stolen the Traveler's Tea from him, Wu wielded it until they tie him up, and P.I.X.A.L. used it on them so they could save Zane from the Never-Realm.

During or after Secrets of the Forbidden Spinjitzu

Probably after the return of the ninja from the Never-Realm, they gave the staff to Cyrus Borg, who placed him among other dangerous artifacts in the vaults of Borg Tower.

When the ninja realized that the only possible way to deprive Nya of her powers was to use Aspheera's magic, they went to the mayor to ask him for her release and also to lend her staff. However, the mayor rejected both requests and had the staff, along with the other artifacts, transferred from Borg Tower to a safer place where the ninja could not get it.

When the ninja learned that the staff was not in Borg Tower, they tracked down the trucks and stole the staff from them, although they had to fight the New Ninja.

When the ninja returned from the mission to the hangar bay, they gave the staff to Aspheera to turn Nya back. However, the sorceress, blinded by revenge, tried to kill the ninja, although she was eventually forced to use the staff to deprive Nya her powers. Later, the staff was probably returned to the Borg Tower vaults.

When the crystal spiders visited Aspheera in her pyramid, they brought her a new staff with a purple handle.

Aspheera was holding her new staff during the Council of the Crystal King meeting. When Lloyd, disguised as the Mechanic, tried to escape, she used the staff's magic to stop him, but failed, although Lloyd was later captured by Mister F. 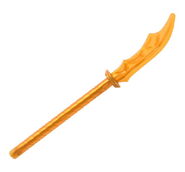