Alive
"Avatar Pink Zane" is a Prime Empire player who uses Zane's Pink Ninja design as an avatar within the game.

When the ninja first enter Prime Empire, they can briefly be seen walking beside another player.

Avatar Pink Zane was standing right next to Nelson when the Speedway Five-Billion announcer was showing the yellow Key-Tana.

Later, after a Chrome Dome and two Ballistic Missiles were taken out in the Speedway Five-Billion, Avatar Pink Zane can be seen with the crowd. 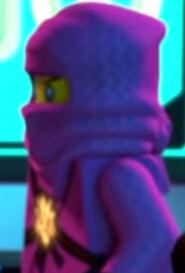 Avatar Pink Zane is seen on the far left, next to Nelson.
Русский
Community content is available under CC-BY-SA unless otherwise noted.
Advertisement