Bad Chair Day is the fifth short based around Master Chen and his throne, taking place sometime during or before the fourth season of Ninjago: Masters of Spinjitzu.

Excited about his new throne, Chen pressed a button, much to Clouse's annoyance. He tried to tell him to wait until he had properly read the manual but was constantly interrupted by the chair's functions. After Chen accidentally teleported them to a jungle, Clouse has no choice but to carry them back home. 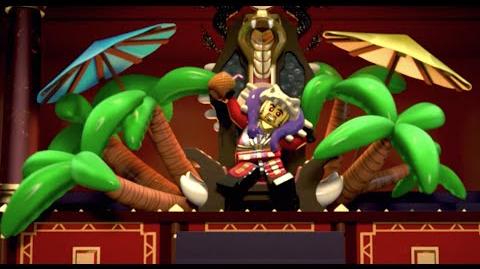 Chen's chair makes a palm tree that pushes Clouse off.

Chen summons a swarm of bats, which he refers to them as "birdies".

A few bats on Clouse.

Clouse is nearly chopped by a bone axe.

Chen lanuches a bunch of rockets.

A squid tentacle on a annoyed Clouse's face.

After combining all buttons, Chen and Clouse are teleported to a distant jungle. . .