View source
watch 01:25
Jurassic World: Dominion Dominates Fandom Wikis - The Loop
Do you like this video?
Play Sound
“Why are we waiting!? We should be attacking when they least expect it. I thought we weren't afraid of anything.”
— Bansha to Soul Archer, "Grave Danger"

The Temple on Haunted Hill
70731 Jay Walker One

Kathleen Barr
Blade Master Bansha was a ghost imprisoned in the Cursed Realm. One of its few female prisoners, Bansha was a sorceress with the power to mind-meld and take over someone's body from a distant location, which proved to be a large advantage upon her arrival in Ninjago. After Morro made his escape, he conjured Bansha and Ghoultar using the Allied Armor, as he sought to locate the Tomb of the First Spinjitzu Master.

Bansha helped Morro in his quest, as she traveled up the Wailing Alps and into the Caves of Despair in numerous attempts to stop the ninja. She also used her telepathic abilities to manipulate others, including Ronin and Misako. Soon enough, Morro claimed the Realm Crystal and traveled to Stiix, where he opened the Cursed Realm and released its prisoners and The Preeminent. Bansha fought against the ninja in the ghost invasion, eventually joining The Preeminent as she walked out into the Endless Sea. When Nya unlocked her True Potential, she created a massive tidal wave that drowned The Preeminent and destroyed the Cursed Realm, ultimately killing Bansha and the other ghosts.

Bansha was, at one point in time, banished to the Cursed Realm.

Bansha was summoned by Morro from the Cursed Realm to aid him in his quest to find the tomb. They soon discovered that the next clue was the Sword of Sanctuary, protected in the Cloud Kingdom, which could only be accessed by scaling the Wailing Alps and jumping into the Blind Man's Eye.

The three ghosts accompanied Morro to the Samurai X Cave, intending to possess one of the mechs, which would be needed to ascend the treacherous mountain. Before they could do so. however, Nya and Ronin ambushed them in the Samurai Mech, though the ghosts gained the upper hand as she couldn't physically hit them. She eventually ejected from the mech, leaving Ghoultar to possess it and turn it into the Mech-enstein. Chasing her and Ronin outside, they cornered them as Morro stood in the R.E.X. Just as they were about to finish them off, it miraculously started to rain, and the ghosts flew away, taking the Mech-enstien, with them.

Together with Morro and her comrades, Bansha ascended the Wailing Alps in order to reach the Blind Man's Eye so that Morro could obtain the Sword of Sanctuary from Cloud Kingdom. They soon discovered the ninja pursuing them in the Fire Mech, Earth Mech, ElectroMech, and Ice Mech. Using her sonic scream, she brought down an avalanche and succeeded in getting rid of the first three mechs, but the ninja managed to pursue in the final one. They then engaged Bansha and her fellow ghosts in battle and managed to get past them and enter the Cloud Kingdom.

Bansha and Soul Archer eventually met up with Morro at the top of the Wailing Alps. While their leader sulked on his failure, Bansha contacted Fenwick, claiming that he would be spared from The Preeminent's wrath if he let them into the Cloud Kingdom and gave them the Sword of Sanctuary. While Morro secured the sword, Bansha and Soul Archer commandeered one of the floating skiffs and used it to rescue him from the ninja.

At the request of Morro, Bansha contacts Ronin telepathically and orders him to hand over the sword in exchange for clearing his curse.

When the thief arrived, Bansha and Soul Archer stood guard over their leader and laughed at Ronin when he called the ninja his "friends."

While on the boat along with Soul Archer, they ambush Master Wu, Nya, and Misako, and also, she manages to possess Misako for a short period of time.

Bansha returned to Ninjago with Wrayth, Ghoultar, and Soul Archer when Morro reopened a portal in Stiix. While they awaited the gateway becoming strong enough for the Preeminent to cross over, Bansha guarded the entrance of Stiix. When Wu and Misako arrived in a noodle truck, Morro temporarily took possession of Bansha's body to speak to his old master.

When the Green Ninja was sighted, Bansha aided in capturing it and brought it before Morro in the center of town. However, the person under the hood turned out to be Nya who used her power over water to send Bansha back into the Cursed Realm. However, due to the portal being opened, Bansha was quickly able to return. She was then sent by Morro to stop the ninja who had begun their attack on the town and she soon came across Zane in his Ice Mech.

During the ghost invasion, Bansha was hit by an Aeroblade and was destroyed. However, she would promptly reform alongside Soul Archer, unscathed thanks to the power of the Preeminent.

Following the Preeminent's death, Bansha was killed due to her connection to the Cursed Realm. With the realm no more, her soul was instead sent to the tamer Departed Realm to rest.

Bansha is a female Ghost Sorceress with the power to mind meld and take over someone's body from a distant location. She can also scream so loudly that she shatters eardrums and causes other destruction.[1] 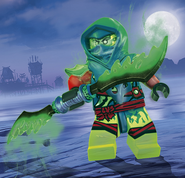 Bansha in the background of a promotional poster for Possession.

In a set commercial 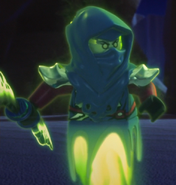 Bansha with her allies

Bansha with the other three ghost generals