This article is primarily about the Beavers' appearances within Ninjago. For more information on the tribe, visit the article on Legends of Chima wiki.

In Chima, a Beaver was seen along with the rest of the tribes.

The Beaver tribe entered the Monastery after Wu and P.I.X.A.L. were trying to find a portal to the Never-Realm. They demand to fix something, so P.I.X.A.L. throws a piece of wood back into Chima causing the Beavers to flock back to their home realm.

A Beaver was seen jumping out of a trashcan before showing his teeth. 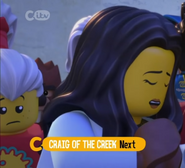 A beaver behind Unagami
Community content is available under CC-BY-SA unless otherwise noted.
Advertisement