Ninjago Wiki
Register
Don't have an account?
Sign In
Advertisement
in: Weapons, 2021 weapons, Ninjago: Masters of Spinjitzu,
and 5 more
English

Escape from Merlopia
71755 Temple of the Endless Sea

Destroyed
The spear was a weapon used by Benthomaar.

Benthomaar possessed the spear as he rescued Lloyd, Jay, Zane, Nya, P.I.X.A.L., and Maya from some Ripper Sharks, and used it while assisting them in escaping, such as deflecting the Maaray Guards' trident blasts while defending Maya.

When Benthomaar was telling his story to the ninja, his spear was leaned on the wall of the Hydro Bounty.

When the ninja visited the Keepers' Village, Benthomaar had the spear attached to his back.

Later, when Kalmaar attacked the Hydro Bounty, Benthomaar removed the spear from his back and turned it a few times in his hand to get into a fighting pose. However, Kalmaar knocked the spear out of his hand and threw it on the floor.

Benthomaar had the spear attached to his back as he, along with Jay, Zane, Nya and Wu were escorted by the Police Commissioner to the interrogation room where Glutinous was.

When Benthomaar swam in Ninjago City with the ninja against the Merlopians, he held the spear in his hand, and when he was attacked by the Maaray Guard, he used it in his defense.

When Benthomaar saved Jay and transported him to the Ninjago News Center, the spear was attached to his back.

After the battle with the Maaray Guards, Benthomaar fought Kalmaar with his spear. As he defended the spear against the trident, Kalmaar used his tentacles to snatch Benthomaar's spear from his hands and break it in two. He then threw the spear into the flooded city. 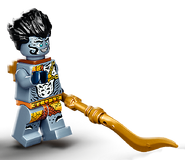 Destruction of the spear
Español
Community content is available under CC-BY-SA unless otherwise noted.
Advertisement