View source
watch 01:25
Jurassic World: Dominion Dominates Fandom Wikis - The Loop
Do you like this video?
Play Sound
“He's of no use to us anymore.”
— Bizarro Cole to the real Cole in "Double Trouble"

Kirby Morrow
Bizarro Cole[1] was one of the four evil ninja and an evil doppelgänger of Cole. He was created by Lord Garmadon with the task to destroy the ninja.

Bizarro Cole, along with Bizarro Zane, Bizarro Jay, and Bizarro Kai were created by Lord Garmadon after the latter saw his own reflection on his Mega Weapon. They were given the task to find and destroy the ninja.

They headed to Dareth's dojo, where they met Master Wu. The wily old man quickly saw through their disguises and tricked them into revealing their true natures by faking them out on where they had supposedly been. When Bizarro Kai answered affirmatively, Master Wu attacked, revealing that the ninja had gone somewhere else. The ninja managed to subdue Master Wu, and they headed to the auto body shop after Nya called to ask Jay if he was still meeting her there. Once at the auto body shop, Bizarro Jay sweet-talked Nya and drew her in for a kiss, leaving her off-balanced long enough to steal the Ultra Sonic Raider. 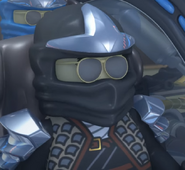