Bottom of the Endless Sea

The Blaster Bike (also known as the Ghost Cycle) was Cole's personal vehicle that he used during the final battle with the Ghost Warriors.

It is a futuristic black motorcycle with some gold details. It is made of Deepstone and has twin carbine blasters, auto-evasive handling and a radio set to soft rock.

The Blaster Bike was created by Cyrus Borg for Cole to fight against the Ghost Warriors in Stiix, finding its blasts to be effective against the ghosts. He used the bike up until the Preeminent's arrival, at which point the Ninja realized they needed a new plan.

With The Preeminent in Ninjago and a legion of ghosts occupying Stiix, the Ninja desperately battle their apparition adversaries. Eventually, Zane remarks that if Deepstone can subdue the ghosts, then perhaps the same can be done for The Preeminent.

Cole rides the Blaster Bike across several rooftops, and he jumps off as it flies off a building and into The Preeminent's mouth. However, this has no effect on the colossal beast, and it continues causing destruction until Nya drowns it by unlocking her True Potential. The Preeminent then sinks to the bottom of the Endless Sea, with the Blaster Bike still inside of its stomach. 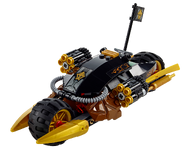 Add a photo to this gallery
Retrieved from "https://ninjago.fandom.com/wiki/Blaster_Bike?oldid=385461"
Community content is available under CC-BY-SA unless otherwise noted.